15 of the most breathtaking Scenic Vistas in America. #8 is mind-boggling! 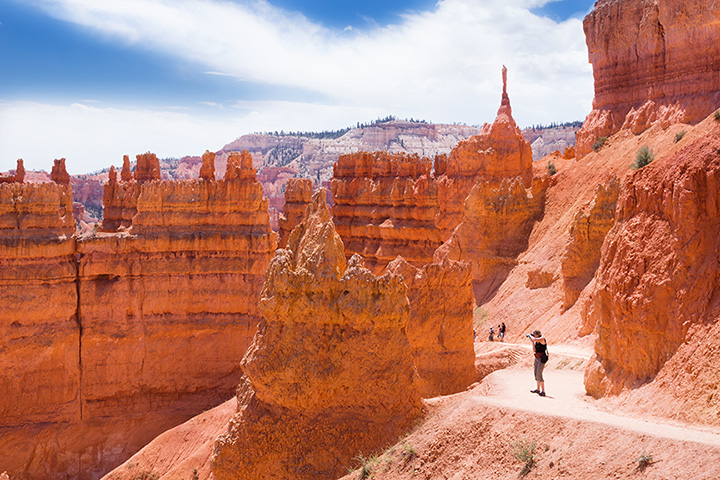 Spacious skies. Amber waves of grain. Purple mountains. Yeah, yeah - we've got those sights covered. But those are just a tiny handful of the beautiful things to see in the United States.

Across its 3.8 million square miles, you'll find every kind of natural wonder, from volcanic lakes to freaky rock formations to amazing urban landscapes and more.

According to the American Automobile Association (AAA), about one in every four Americans takes a "road trip" during the year - so put these 15 sights on your bucket list. And make sure your phone is fully-charged, 'cause you'll want to take a ton of pictures!

Step back in time to 19th-century New England. It's America's oldest working seaport, so you'll view plenty of quaint fishing villages. There's a thriving art colony here, too. Rockport is the location of a recreated fishing shack (called "Motif #1") also known as "the most painted building in America."

Located in the Finger Lakes region of New York (and on the way to Niagara Falls), this park has been described as making visitors feel like they've stepped into The Lord of the Rings. Among its numerous waterfalls, Rainbow Falls is a favorite for photo ops.

Our nation's capitol combines history, sentiment and some amazing views. From the steps of the historic Lincoln Memorial (the site of Dr. King's "I Have a Dream" speech), you can see the reflecting pool and the Washington Monument. Both sunrise and sunset are pretty impressive here, as they crest above the Capitol Building.

The rugged beauty of these red and orange mountains makes for one of the most spectacular views in the U.S. You'll also get great views of wide-open grass prairie. Native Americans hunted here for 11,000 years.

Even if you saw it in the movie, Close Encounters of the Third Kind, nothing prepares you for this strange rock formation rising 5,000 feet above sea level. Some adventurous types climb it, but for most of us, just taking in this massive geological wonder is thrill enough.

There are over 2,000 natural stone arches, along with massive, balanced rocks and other astounding stone wonders. The sunsets alone are worth the trip - the light playing on the red rocks is simply breathtaking.

It's known for its "hoodoos," bizarre pillars of rock formed by erosion. Bryce Canyon is home to the world's largest collection of these strange formations. Some folks have called it a "forest of stone."

It's 275-square miles so pristine you'll hardly believe you're still on Earth. This is actually the world's largest gypsum dune field; not only does it look weird, it feels weird, too. Kind of appropriate that it's in the same state as Roswell, where the aliens hang out.

A no-brainer. About 17 million years ago, the Colorado River began cutting its channels. Today, gaze upon a 277 mile long, 18 mile wide, 1 mile deep natural wonder. Seriously, you just cannot get a sense of its grandeur from a photo. Havasu Falls, within the Canyon, is a bonus attraction; its unusual blue-green color (from the magnesium in the water) has made it a favorite image on calendars.

Formed almost 8,000 years ago when Mount Mazama collapsed, this is the deepest lake in America. Because the lake is fed entirely by rain and snowfall, its clear blue waters are incredibly pure. Rim Drive features more than 20 scenic overlooks to get your fill of photos.

The "PCH" is 600 miles running along the Pacific coastline, and it just begs to be seen via convertible or motorcycle. It starts in San Diego and runs all the way north to San Francisco. Along the way, the scenery makes dramatic changes that will require various "stops" to savor.

This iconic bridge became "iconic" not just for its graceful design (making it one of the most photographed in the world) - but for the spectacular views over San Francisco Bay. The drive into San Francisco from Marin County never fails to astound even the most jaded commuters.

Stand under these old-growth trees and prepare to have your mind blown. The Giant Forest contains five of the ten largest trees in the world. The General Sherman is 275 feet tall and is thought to be 2,500 years old.

It's considered the "crown jewel" of the Denali National Park. The still waters perfectly reflect Mt. McKinley (the tallest mountain in North America). And on the way, you also get a look at some pretty incredible wildlife: bears, caribou and other critters.